Boston Impresses Once Again, as Kentucky’s Offense Coasts Past LSU 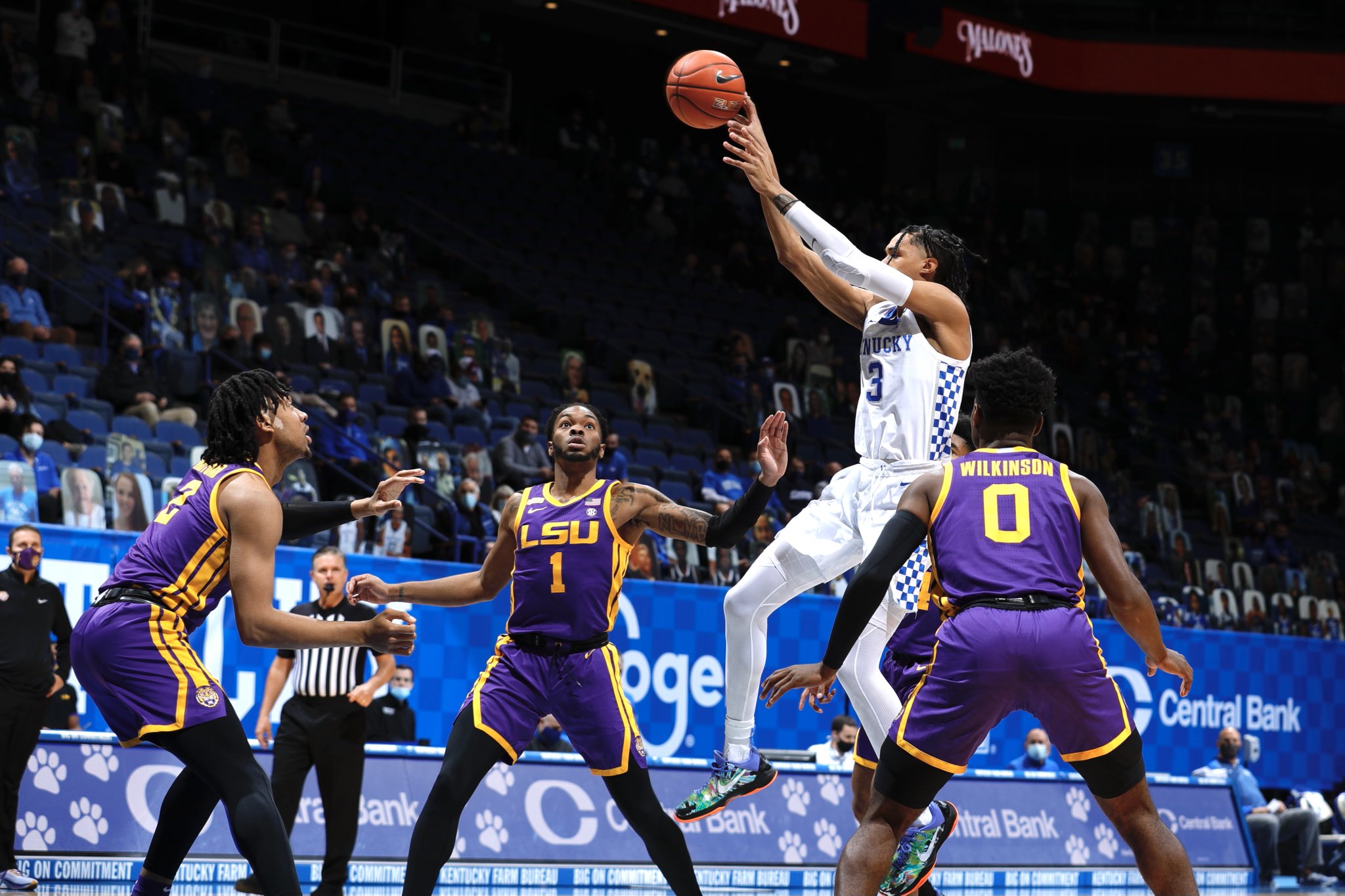 After a crushing defeat at the buzzer against Georgia on Wednesday, the Kentucky men’s basketball program desperately needed a win Saturday to keep any hope of an NCAA Tournament berth alive. And with the hot-shooting LSU Tigers headed to Rupp Arena, that would be a tall order for a team who’s struggled to find any sort of offensive rhythm for most of the season. But thanks to a balanced offensive attack that saw four Wildcats reach double figures, the Cats ran past the Tigers 82-69.

Prior to tipoff, LSU led the league in scoring (85.2 ppg) and field goal percentage (48.0%) thanks in large part to freshman guard Cameron Thomas and sophomore forward Trendon Watford. Thomas averages a league-best 22.0 ppg and Watford chips in 18.1, good for third-best in the conference. And while the two combined for 44 points on 16-40 shooting Saturday, the rest of the Tigers connected on just 9-25 from the field and were a large reason LSU shot just 38.5% from the floor. Thomas tallied 18 points and Watford had 26, but no other player on LSU’s roster registered more than six points.

Offensively, Kentucky had one of its best games of the year, scoring a season-high 82 points on 27-64 (42.2%) from the floor. Of the 27 made baskets, 15 of them were assisted on, with freshman guard Devin Askew leading the way with four. And perhaps most importantly, the Wildcats committed only nine turnovers, just the second time this season that they haven’t eclipsed 10 in a game.

After coming off the bench and scoring 18 points in Wednesday’s game against the Bulldogs, freshman Brandon Boston Jr. was inserted into the starting lineup and tallied another 18 points on 7-17 shooting. The guard also added six rebounds, three assists, zero turnovers, a block and a steal in the winning effort and cited his work ethic as a big reason for his recent success.

Keion Brooks Jr. had yet another solid outing, registering 15 points in 29 minutes to go along with nine rebounds and a pair of blocks. Olivier Sarr added 13 points of his own and Davion Mintz had 11.

The game proved never to be in doubt, as Kentucky jumped out to a quick 23-9 lead after beginning the game 5-8 from downtown. LSU made a run to cut it to ten with 4:51 in the half before the Cats coasted to a 49-36 halftime lead.

The Tigers wouldn’t go down easily, though, and utilized an early 15-7 run in the second half to pull within five at 51-56. But as had been the case all night, the Cats had an answer. Boston nailed his second three of the game, converted an and-one in the lane and hit a second-chance layup to give the Cats the comfortable 64-51 lead for good.

Head coach John Calipari was pleased with his team’s ability to execute offensively and touched on the underdog mentality the Cats’ have to have as they approach a tough stretch of conference games.

“These are the games you want to play to where you know you’re not supposed to win the game,” Calipari said. “Now you go and it gets you going and you play. Instead of playing not to lose you play to win. You don’t look at the scoreboard.”

Saturday’s matchup was the first of a five-game stretch against four of the top five teams in the SEC. They’ll travel to Alabama Tuesday for a rematch with the Crimson Tide before a home clash against the Texas Longhorns on Saturday as a part of the SEC/Big 12 Challenge. Tipoff in Tuscaloosa is set for 7:00 pm on ESPN.