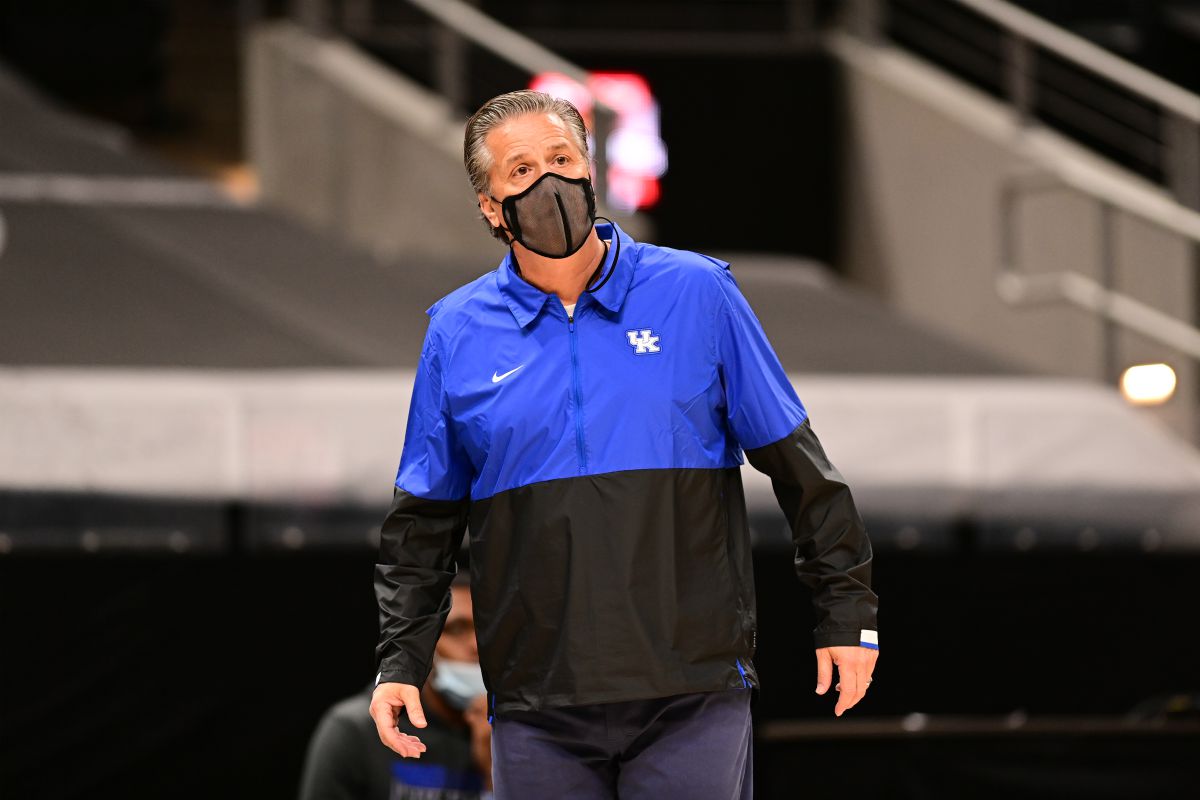 Kentucky lost their second straight game of the 2020-21 season Tuesday night vs. Kansas, where another less than stellar second half doomed the Wildcats.

Kentucky held a 35-29 halftime lead, but struggled mightily offensively in the second half, as Kansas pulled out an ugly 65-62 victory in the Champions Classic.

Below is a transcript of everything John Calipari had to say about the loss. Video of the postgame press conference can be found at the bottom of this post.

On the team’s offensive struggles …

“What do you see? Why don’t you talk to us? Go ahead. Kyle, you say it. [Reporter: Terrence (Clarke) and BJ (Boston Jr.) need to give it up.] Hmm. And our point guards can’t have eight turnovers between them over dribbling and trying to control the ball versus just give it up and getaway. You’re better off the ball than you are on the ball. It’s hard to accept that, but that’s the truth. Let me say this. They switched everything, so it’s hard to really get some assists. You’ve got to run downhill. And when we did, we got to the rim and got layups. But, it’s hard because you’re going to get bumped. You’d rather pull it back and mess around with the ball and then you just look like you’re not a very good player. But, you know, they’ve got to go through this. I mean this is all part of the growth of this. Let me just say this. If I was Bill Self, I’d be so happy. Because my team was held to 29 percent from the floor and 23 percent from the 3 and we win. I love those games. Just to slog it out, and let me tell you what they did to us in the second half: they punked us. They just got fed. We couldn’t even bring in the ball and all they did was when after people, and guys just ‘it’s not that important.’ ‘Let me do …’ We have to learn. You know sometimes, I think Bill Belichick said: ‘You have to know things that keep you from losing to learn to win.’ Well, what keeps you from losing is not turning it over. Just not. Second thing is, free rebounds we’re getting them. You understand that we didn’t rebound on free throws? The biggest one of the game. The guy didn’t block out. A guy ran right around him and grabbed the ball. It’s embarrassing. But that’s what we need to learn. Olivier (Sarr)? A breakout, you’re going to foul? What? It’s not football. It’s not a touchdown. Let him shoot a layup. We’ll score in three seconds. And that’s a veteran. Davion (Mintz): veteran. In crunch time, you drove in and just threw a ball. We were going to win the game. What did you do that for? ‘I just had the shot. I really had that.’ ‘You just threw it at the rim.’ That’s the stuff we’ve got to work through. So, but you know what? We played a lot of people. Jacob (Toppin) helped himself move into a rotation spot now. Some guys have got to grow up and grow up fast. Part of it is, you can’t have an excuse. This is a no-excuse program. You want to make excuses? You shouldn’t be here. This is, you figure it out and you go. Listen to what I just said. We held them to 29 percent, and 23 from the 3 and we rebound with them, but they got us. We end up with 12 blocked shots and then you have to say: ‘How the hell did you lose?’ We had 16 turnovers and eight from your point guards. You’re going to lose. Well, why did they have eight? Because they’re trying to make hard plays. Instead of making the easiest play and getting away from the ball. But the 16 were spread out because I think Brandon had three, Terrence had three. Between those two they had six. So it was our guards who turned it over.”

On Sarr struggling with foul trouble …

“Yeah, I told him after the game. That was the dumbest foul I’ve ever seen. Let the guy shoot a layup. Who gives a shit? It’s nothing. Again, this isn’t a touchdown where we get a kickoff and march it back. We’ll score in five seconds. So, who cares? I mean we’ve got to be smarter. But, I’ll say it again, you have to know what keeps you from losing before you can win. And we don’t know it yet because I’m not sure – we’re still not playing for ourselves. How about Isaiah (Jackson) who played his heart out shoots a 3? It’s a tie game. Why did you do that? ‘Well, I was open.’ ‘You were open because they left you open.’ I mean there was a lot of – but you know what? We’re 10 new guys playing on national television and playing Kansas who had a chance to be in the game and did well against Gonzaga. And we defended them. We guarded them. We just weren’t rough enough and that’s why I just kept putting guys in the game. If you’ll rebound I’m going to leave you in the game. Couldn’t get Cam (Fletcher) in. Couldn’t get a ball.”

On 3-point shooting being off in two straight games …

“Let’s hope it’s not three. I think we’ve got a good 3-point shooting team, but we’re just not making them right now. It could be the pressure. These kids have never been in this situation and it means more. You’re playing with headphones on and gloves on and shooting the ball. Now all of the sudden this thing is different. A guy is hanging on you. You’re playing with a guy that’s four years older than you and the guy is up in you. Ok. It’s a different deal and it takes time to get used to.”