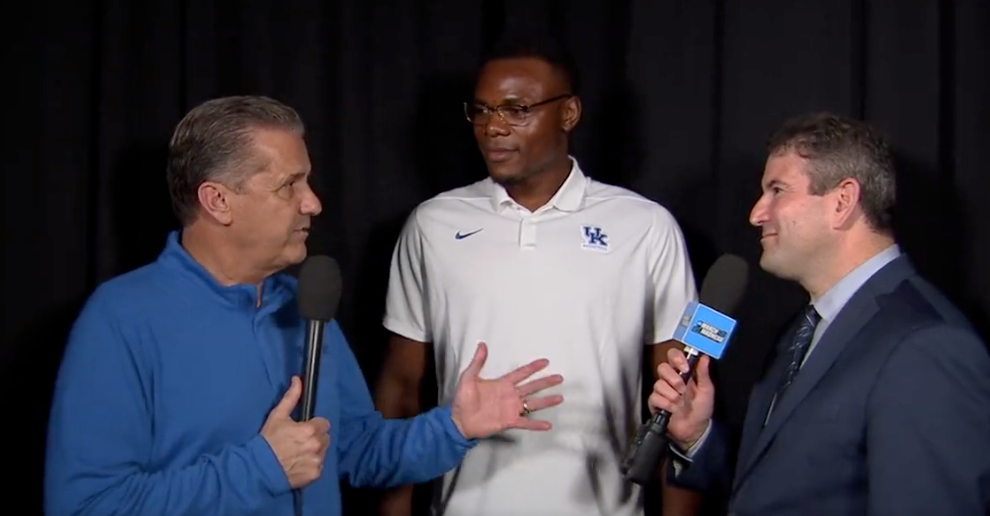 Oscar Tshiebwe continued to collect honors on Friday, winning the National Player of the Year by the Associated Press.

Tshiebwe was in New Orleans to receive the honor, along with head coach John Calipari. Calipari and Tshiebwe joined Andy Katz to discuss the season and more.

It’s been two weeks since Kentucky’s season came to an end in the opening round of the NCAA Tournament vs. Saint Peter’s.

“We were all devastated but we’re over it – we were devastated for a while and now it’s OK,” Calipari told Katz. “Let’s learn from it – let’s move – let’s grow. Me being here for him, it’s a big deal for me.”

The junior forward has a decision to make regarding his future – to leave Kentucky for the NBA or to return to lead the Wildcats as the reigning National Player of the Year?

“I trust coach, he has done it better than anyone I know,” Tshiebwe told Katz when asked about his plans. “This moment – we just finished the season and we are going through a lot – just taking my time, praying to God, and talking to coach. I have not made a decision yet – going or leaving.”

Calipari chimed in following Tshiebwe’s response, showing his support for whatever the UK star decides.

“We talked, he knows I’m for him, said Calipari. “And he goes through the process and there are some things that he’s looking for. If he chooses to leave, I’ll be sad because I’d like to coach him another year but I’ll be happy for him.

“If he chooses to come back – let’s win a national title, let’s go,” Calipari continued. “Let’s do what we did – be the fifth rated team but let’s not get knocked out. He’s got to do what’s right for him and we’ve got to have everything in place so he can make the kind of decision that’s the best thing for him.”

“What he’s done hasn’t been done in 42 years”@UKCoachCalipari & @Oscartshiebwe34 reflect with @TheAndyKatz on Big O's outstanding season with @KentuckyMBB ? pic.twitter.com/GLeJTBrMwt