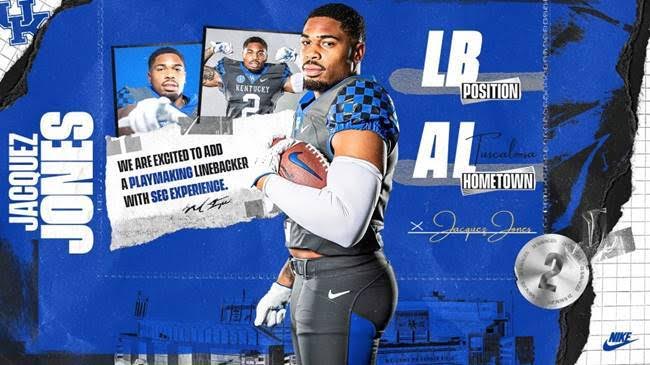 LEXINGTON, Ky. – Former Ole Miss linebacker Jacquez Jones has signed to play football at the University of Kentucky, head coach Mark Stoops announced Thursday. He will be eligible immediately and will have two seasons left to play.

“We are thrilled to add Jacquez to our team,” Stoops said. “He’s an experienced playmaker who has been a great leader in our league.”

The three-year letterwinner played in 33 games with 19 starts, totaling 182 tackles in his Ole Miss career.

In 2019, he saw action in all 12 games, with nine starts at inside linebacker, finishing second on the team with 71 tackles, including 7.5 tackles for loss and two forced fumbles.

Jones appeared in every game as a true freshman in 2018 for Ole Miss, earning one starting spot vs. Southern Illinois. He was named to the Southeastern Conference All-Freshman team after charting 36 tackles with 2.5 tackles for loss in his debut season. He was also named to the Athletic Director’s Honor Roll in the fall of 2018 for his work in the classroom.

As a senior, he helped lead Hillcrest to its first state semifinal appearance since 1985, playing under head coach Sam Adams. He went on to represent Alabama in the Alabama-Mississippi All-Star game where he recorded six tackles, including one tackle for loss.

Jones will major in sociology and minor in criminology at UK.

Seven home games at Kroger Field highlight Kentucky’s 2021 football schedule. The Wildcats kick off the season on Sept. 4 against the ULM Warhawks, the first of three consecutive home games. Missouri arrives in Lexington on Sept. 11 for the first conference game of the year before Chattanooga wraps up the homestand on Sept. 18.