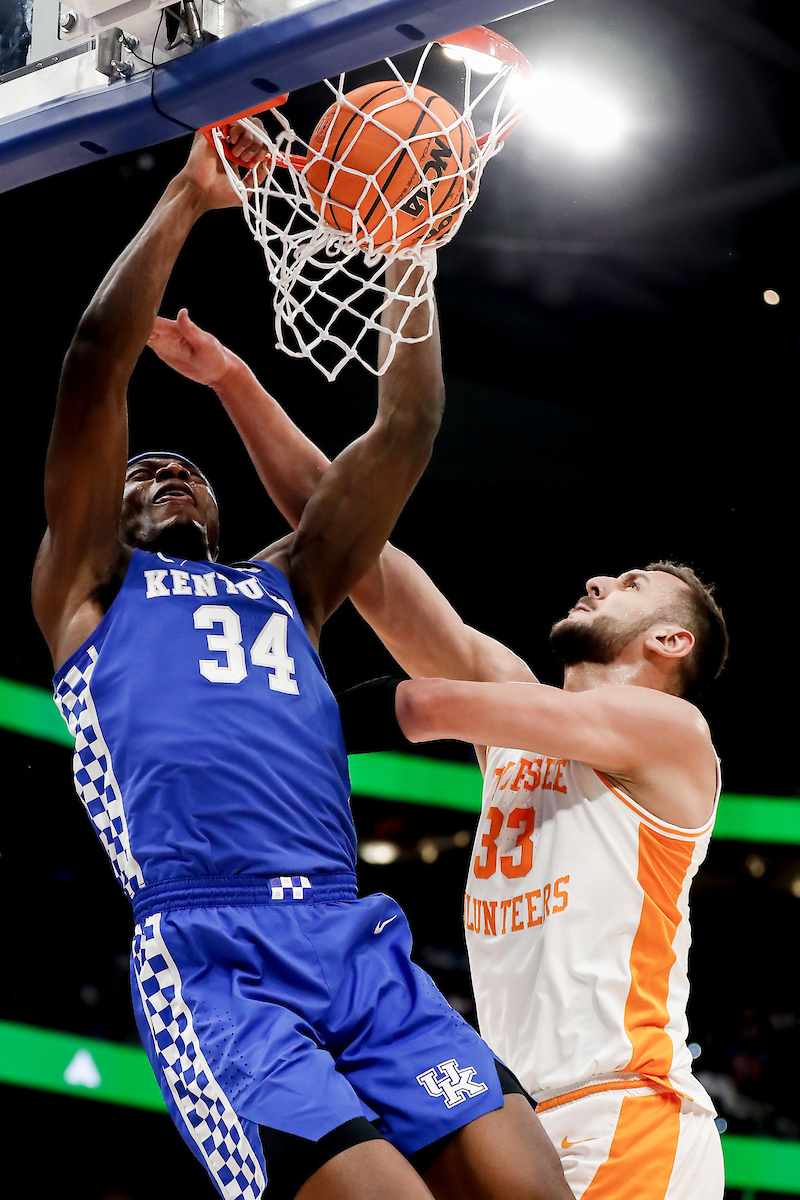 LEXINGTON, Ky. – The honors continue to roll in for Kentucky junior forward Oscar Tshiebwe. He was named a Wooden Award All-American and a finalist for the Wooden Award’s National Player of the Year on Wednesday during a telecast on ESPNU.

Voting took place March 14-21, 2022. As insisted upon by Coach Wooden at the Award’s creation 45 years ago, all players were certified by their universities as meeting or exceeding the criteria of the John R. Wooden Award. The 46th annual John R. Wooden Award Men’s Player of the Year will be announced on April 5 on SportsCenter on ESPN.

Kentucky’s Anthony Davis (2012) is the only winner in program history after leading the Wildcats to its eight national championship.

In addition to his offensive and rebounding prowess, on the defensive end Tshiebwe was the only major conference player averaging at least 1.6 blocked shots and 1.6 steals per game at the conclusion of the regular season.

On Jan. 25, Tshiebwe had a 21-point, 22-rebound showing in the overtime win vs. Mississippi State, the first 20-20 game for a Wildcat in 46 years, when Mike Phillips produced two such outings in 1976.

Another eye-popping stretch was a combined 59 points and 30 rebounds in wins vs. Georgia and at Vanderbilt on Jan. 8 and 11. A game after posting 29 points and 17 rebounds vs. Georgia — the first UK player with at least 29 points and at least 17 rebounds in a game since Jamal Mashburn totaled 38 points and 19 boards vs. Eastern Kentucky on Dec. 8, 1992 — he went for 30 points and 13 rebounds at Vanderbilt. That marked the first 30-point, 10 rebound-game for a Wildcat since Patrick Patterson did it vs. Tennessee State on Dec. 22, 2008. The back-to-back performances also marked the first time a Kentucky player has scored at least 29 points in consecutive Southeastern Conference games since Kenny Walker in February 1985.

Tshiebwe corralled at least 10 boards in all but two games this season and finished the season with 21 straight games with double-digit rebounds. He became just the third player in program history to amass at least 500 rebounds in a single season as he snared 515.

Tshiebwe was elite on the glass from the very beginning of the season. He set new records for the Champions Classic and UK debut with 20 boards vs. Duke in the season opener, nearly tied the Rupp Arena record with 20 rebounds in his first home game, and then shattered that Rupp record with 28 boards vs. Western Kentucky. That easily surpassed Shaquille O’Neal’s previous mark of 21. It’s worth noting Tshiebwe did that primarily against the tallest player in college basketball, Jamarion Sharp, who stands at 7-foot-5. With 20 boards the following game against Missouri, his 48 boards tied for the most over a two-game span by any Division I player over the last 25 seasons (according to ESPN Stats & Info).

Tshiebwe concluded the season with 16 straight double-doubles, the longest streak since complete game-by-game rebounding records were kept dating back to 1969 for the Wildcats. He totaled 28 double-doubles this season which is a new UK single-season record.