Reed Sheppard Earns Opportunity to Make Own Decision about Kentucky 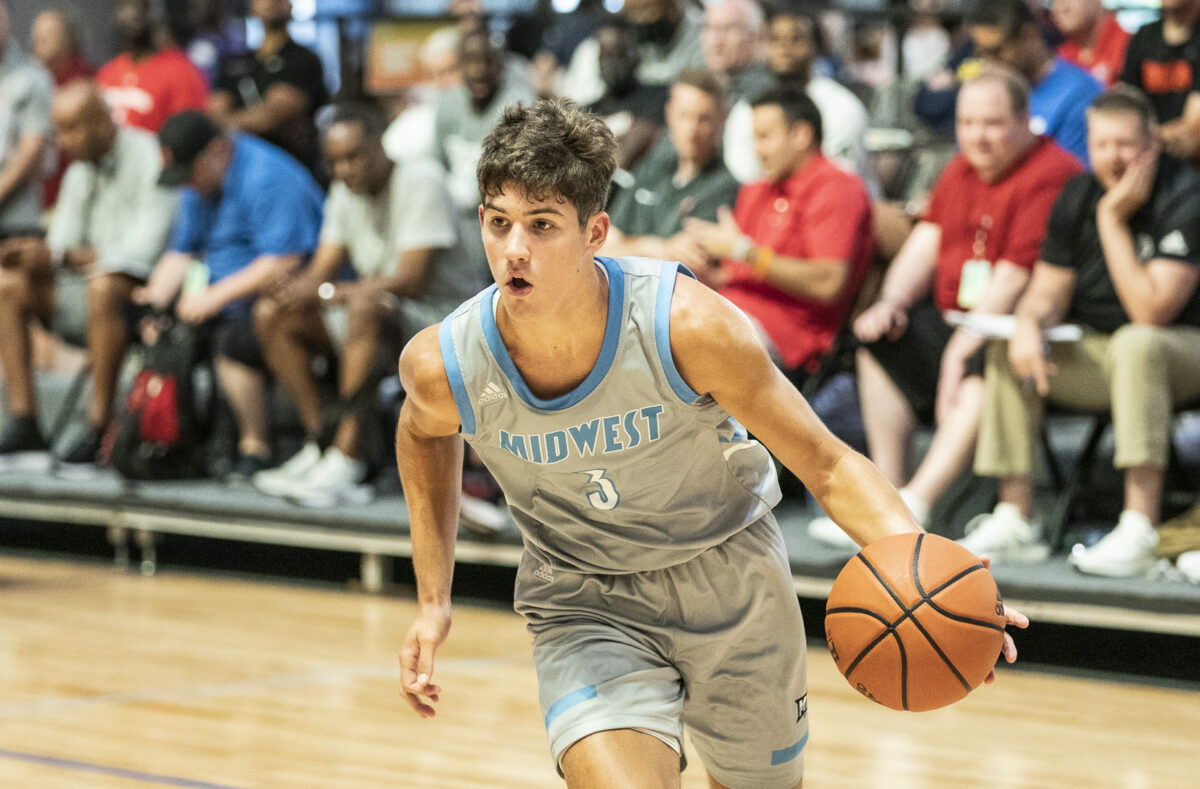 Will Kentucky offer in-state star Reed Sheppard, and will the son of two UK greats follow the same path to Lexington?

John Calipari answered part one during the first weekend of the July evaluation period in Birmingham, where college coaches gathered to watch the top talent in the country.

Sheppard, in front of Calipari and the entire UK coaching staff, proved he’s worthy and good enough to play on the same stage his father Jeff, the Final Four MVP of Kentucky’s 1998 NCAA title run, and mother Stacey, who has her name all over the UK record books, played on.

“We played Thursday night, and Coach Cal and his staff were able to watch,” Jeff Sheppard said. “They were impressed with the way Reed played. He didn’t play a good game from the standpoint of shooting the basketball, but he took good shots.

“We started hearing from Orlando Antigua that Coach Cal would like to talk at some point during the weekend. We just thought that was cool, and he was going to encourage Reed and maybe start recruiting him and watching some more of his games. Next thing you know, Friday morning we had a game, and Coach Cal had some other commitments, but Orlando Antigua watched Reed’s second game.”

That was the game Reed decided to put on a show with Antigua sitting courtside, taking it all in. The North Laurel junior poured in 26 points, 23 of them coming in the first half behind five made three-pointers.

Following the game, John Calipari wanted to talk, so the Sheppard’s gathered in their hotel room and waited for the call.

“Antigua called us and linked in Calipari. They just complimented Reed on his play and his demeanor and pace. Then just said this is where we are with the 2023 class, we’ve made some offers, and we would like to make you an offer. It shocked us all, and we’re very thankful. It meant a lot to Reed and us.”

Sheppard is the fourth member of the 2023 class to add an offer from Kentucky, joining Elijah Fisher and J.J. Taylor and Jalen Lewis. Lewis has already signed a professional contract with Overtime Elite, becoming the youngest player (16) to sign a pro basketball contract.

In addition to Kentucky, the 6-foot-3 Sheppard holds major offers from Arizona State, Indiana, Iowa, Louisville, Texas A&M, and others, while Gonzaga, Virginia, and Clemson have been in contact since mid-June.

“All of the offers have meant a lot, but you know, we live in Kentucky; Stacey and I played at Kentucky,” Jeff said. “We have no idea how the recruitment is going to play out. Reed is just trying to get his arms around all of this right now, and it’s a little bit of a whirlwind, but that’s OK. It was definitely very special.”

Reed led the state of Kentucky in scoring as a sophomore with 30.1 points per game, emerging as a consensus Top 75 recruit and climbing to the No. 39 overall player in Rivals’ 2023 rankings. He got his opportunity to live up to that ranking against the best competition in Birmingham, something his father wanted to see.

“This is what we’ve been waiting for. I’ve been saying all along that I wanted to see my own son play in front of the college coaches at the highest level against the very best competition in the country. I need to know where he is, and he needs to know where he is. That’s the setting that we just experienced, and that’s why they do it. That’s why it’s such a big weekend because you get to evaluate yourself, you get to be evaluated by the very best leaders in this industry, and it wasn’t only Kentucky there.

“What a cool setting to be in the middle of the game and look over to see Chris Mack, Juwan Howard, Tony Bennett, Mark Pope, and so many others. It just doesn’t stop. What a cool atmosphere to be a part of. It was a blast.”

Birmingham wasn’t the first time major college coaches had evaluated Sheppard, but Calipari and Kentucky made their first appearance. Kentucky passed on the opportunity to evaluate the rising junior during the Titans-Rockets Summer Shootout in Shelbyville, Kentucky, earlier this summer, but timing is everything.

“Kentucky had some pretty important business to take care of in the summer,” Jeff said. “It wasn’t like they were going to kick back at the Joe Craft Center and watch TV. They were hosting the best players in the country in the 2022 class and trying to rebuild from a season that was a real challenge. Could they have made an effort to run up the road? They could have, but what message does that send to the very best of the best that they’re looking at playing as soon as next year?”

Now that a Kentucky offer is on the table, the buzz around Sheppard will only heat up in the state of Kentucky. North Laurel High School’s gymnasium, known as “The Jungle,” will certainly be just that the next two years.

“It helps more than anything that he’s got two parents that love him and care for him, not just that we played at Kentucky. I’m knocking on thirty years removed from this process; things were a little different thirty years ago. I went through it, but I went through it a long time ago. It’s a different animal now. You have new rules coming into play that change up things, but through it all, it will be Reed’s decision. We will be there to support him no matter what happens, and more than anything, we’re just trying to personally enjoy the moment and create the moment around Reed so he can enjoy the moment as well.”

Those new rules coming into play include NIL (Name, Image, Likeness). Imagine the financial opportunities Sheppard would have at Kentucky, especially alongside his two-time national champion father and mother who has her name etched throughout the UK record books?

“We’re actually trying to figure out what our thoughts are on this like I think a lot of the country is. We’re definitely going to be patient in regards to learning how all of this is going to play out. Thankfully we have some time before we have to figure it out.

Will Sheppard take the 75-mile path from London to Lexington? John Calipari handled part one. The rest is in Reed Sheppard’s hands.