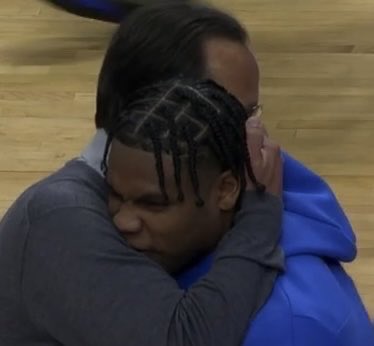 Sahvir Wheeler returned to action in Kentucky’s 107-79 win vs. Tennessee, scoring 21 points for the Wildcats.

Wheeler missed Kentucky’s games vs. Georgia and Vanderbilt due to a neck injury he suffered in a loss to LSU.

Wheeler’s injury kept him out of action vs. his former team. Prior to the Georgia game, Tom Crean gave Wheeler a hug and grabbed his injured neck. The moment looked awkward on TV, where you could clearly see it wasn’t comfortable for Wheeler.

The UK guard was asked about the exchange during a Zoom press conference Tuesday, where he admitted that the neck grab was uncomfortable.

“He was just like, what’s up, get healthy, along those lines,” Wheeler said. “It wasn’t necessarily awkward but he did grab me by the neck. That made me uncomfortable a bit.”

Wheeler missed the game against his former team/coach because of a neck injury. And then Crean decided to go headlock in the pregame. So odd. https://t.co/w9RKhQ7cw3 pic.twitter.com/kqknW58nww