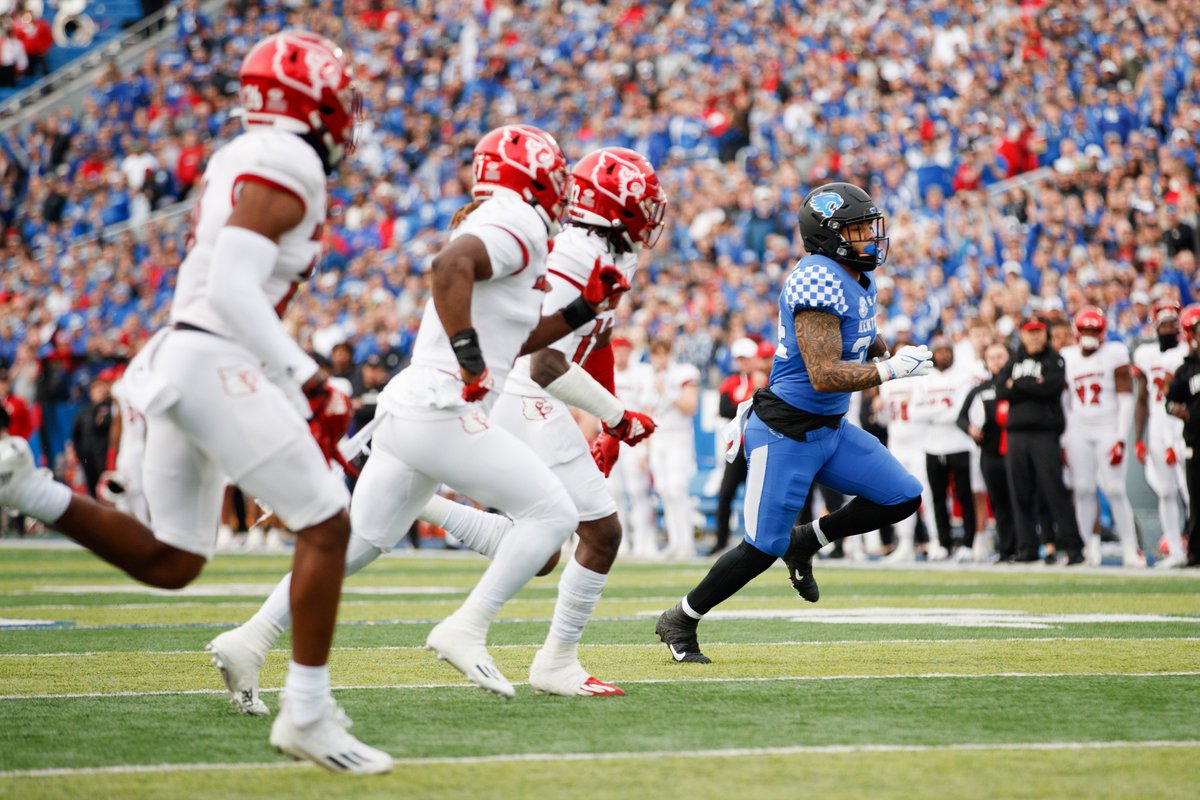 The Kentucky Wildcats football team finished the regular season by beating the Louisville Cardinals 26-13 at home. Senior night was full of emotions, as fan favorite Chris Oats was honored pregame to a roaring Kentucky crowd. While standing on the field, Oats threw a legendary L’s down celebration to hype up the crowd.

Whatever Stoops and company said during halftime lit a spark under this team, coming out explosive against their rival at the start of the second half. The defense forced a quick three and out, and the team dominated.

Brad White again impressed with his defensive game plan. Big Deone Walker was a wrecking ball inside, living in the backfield of either quarterback that Louisville played. Walker finished with six tackles, half of a sack, one tackle for loss, and two quarterback hurries. Fellow Wildcat JJ Weaver had a great game with seven tackles, three solo tackles, one sack, one tackle for loss, one pass breakup, and one forced fumble. Jordan Lovett finished the game off with a late interception. Kentucky was making Louisville use short passes and clock to get down field, and when Domann forced it down field, it was tipped at the catching point right into Lovett’s hands to seal the game.

Quarterback Will Levis, who always faces Louisville with an increased intensity, led the team with two touchdown passes. Levis looked on point most of this game, airing it out to five different receivers. He nearly had a third touchdown on a fade route, but a Louisville DB raked it out as Rahsaan Lewis tried to bring it down to the ground.

Chris Rodriguez came out looking exactly as he always does, running over defenders and bouncing off of others. With one touchdown called back on a holding penalty, C-Rod posted 120 yards on 24 carries, but did not reach the end zone.

Kicker Matt Ruffolo put it all together on the final game of the season. Tallying four field goals on four attempts, exciting the UK crowd. Special teams played well, capped off by an amazing punt at the end of the game by Wilson Berry to pin the Cards within the one yard line.

Domann returned to QB1 for Louisville after being pulled in the second quarter. Neither QB saw a lot of success for Louisville, combining for 145 yards, two interceptions, and only one late touchdown on a busted coverage.

Junior running back Jahwar Jordan was a standout for the Cardinals, rushing for 145 yards on 22 attempts. When he was able to reach the edge he would make an explosive play and gash the defense for big gains. Kentucky limited those big gains in the second half, but Jordan still played well.

The Cats finish the season at 7-5, which underwhelms the prediction many had for this team. This team fought through many injuries and scheme issues. The Wildcats especially had a lack of execution by what many believed would be a a dominant force, but just could never get it all together.

Kentucky will wait to see where they play their bowl game and who they play.