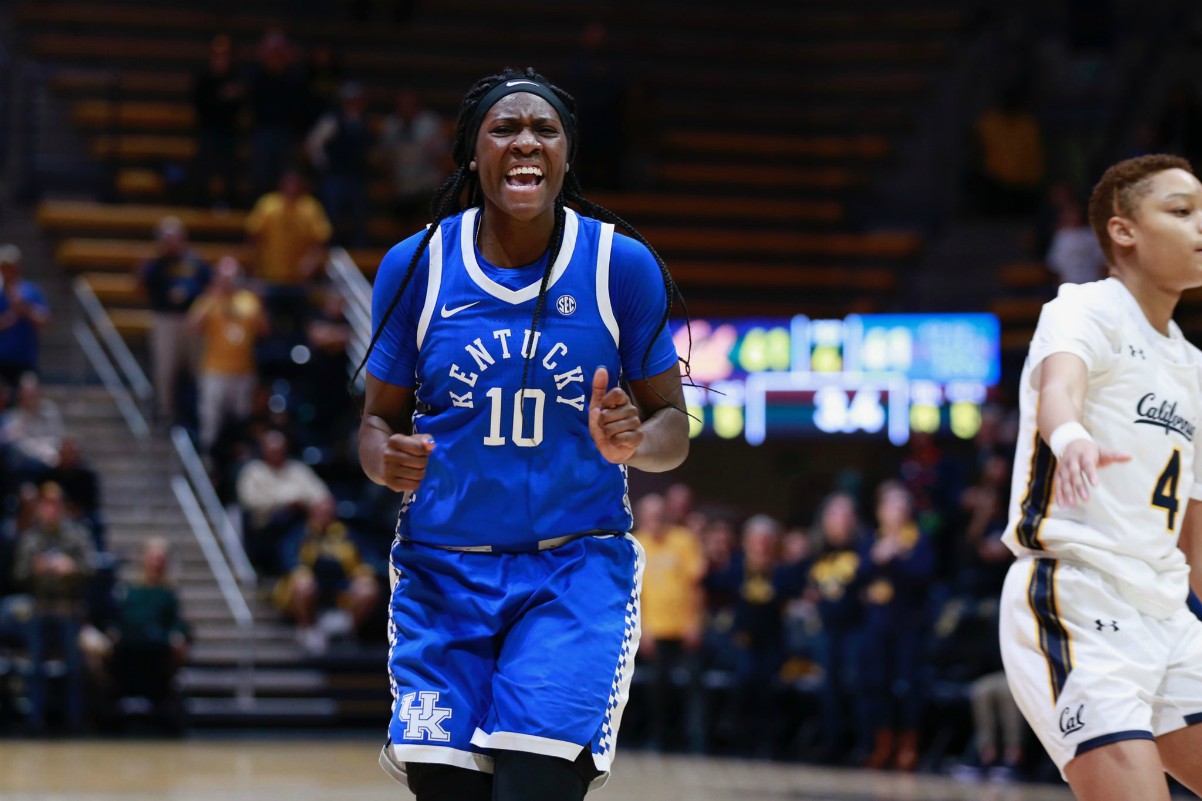 LEXINGTON, Ky. – University of Kentucky junior guard Rhyne Howard has been named the Southeastern Conference Player of the Year for the second straight season by league coaches after putting together yet another record-breaking season for the top-20 ranked Wildcats.

Howard, who was also named to the All-SEC First Team, was joined on the list of league honors by senior guard Chasity Patterson, who was tabbed to the SEC All-Defensive Team. This is the second conference honor for Patterson, who last season was named the SEC’s 6th Woman of the Year.

Howard continues to place her name all over the SEC honor sheet, earning multiple conference honors for the third straight season. In 2020, the native of Cleveland, Tennessee, was tabbed the SEC Player of the Year, All-SEC First Team and SEC All-Defensive Team. As a freshman in 2019, Howard was the SEC Freshman of the Year and All-SEC First Team.

Howard is the third player in program history to earn All-SEC First-Team honors from league coaches three times, joining Makayla Epps and Leslie Nichols. The guard becomes just the third player in SEC history to earn two player of the year honors prior to their senior seasons, joining South Carolina’s Tiffany Mitchell (2014 and 2015) and A’ja Wilson (2016, 2017 and 2018). Howard and former UK All-American A’dia Mathies are now the only players in Kentucky women’s basketball history to earn multiple player of the year honors from league coaches.

Howard’s honor gives Kentucky five SEC Player of the Year honors since 2010, tied for the most in the league during that stretch with South Carolina. UK and USC have claimed 10 of the last 12 player of the year honors with Tennessee and Mississippi State each claiming one during that time span. UK’s honors have been claimed by three different players in Victoria Dunlap, Mathies and Howard.

Her best performances this season have come against the best teams in the nation. In 10 games against ranked opponents, Howard is averaging 21.2 points per game, hitting 46 percent from the field and 39 percent from 3 with 6.9 rebounds per game and 3.2 assists per game. Howard scored 33 points at No. 12 Mississippi State, hitting four 3s with 10 rebounds and six assists. She scored 25 points in the fourth quarter and overtime against the Bulldogs, scoring 25 of UK’s last 31 points, including 10 of 14 in overtime.

Other impressive performances on the biggest stage include 32 points with seven rebounds, three assists and two steals against No. 5 South Carolina and 24 points with four 3s, 10 rebounds and four assists against No. 10 Arkansas. She also posted 22 points against No. 13 Indiana and at No. 8 Texas A&M. Most recently, Howard took over for Kentucky at No. 17 Georgia with 27 points, four rebounds, four steals, two assists and went 4-of-4 from 3.

For her career, Howard has scored 1,553 career points sitting 10th in UK history in points scored. She needs 10 more to tie Sara Potts for ninth. Howard is the second player in school history to reach 1,500 career points prior to their senior season with the other being All-American and UK all-time leading scorer Valerie Still.

Patterson, who is a semifinalist for the Naismith Women’s Defensive Player of the Year award, has had an impressive senior season for UK, ranking top-five nationally with 70 steals and top-15 nationally with 3.0 steals per game. Her impressive steal total this season has moved her up to seventh in program history in steals per game with over 2.26. The Houston native has started all 23 contests, averaging 13.2 points per game on 48.5% shooting from the field. She is hitting 37.5 percent from 3 and has dished out 62 assists this season.

The speedy guard has put her name all over the UK record book this season becoming the third player in school history to score at least 30 points in a season opener. She is also the third player in program history to record 10 or more steals in a game while her and Nichols are the only players to record eight or more steals in three or more games in a season.

Recently, Patterson had one of her best games of the season against top-20 ranked Tennessee, scoring 21 points with five rebounds. She went 5-of-8 from the field and 3-of-4 from long range in the game with a steal.

Howard, Patterson and No. 17 Kentucky will return to action Thursday in the second round of the SEC Tournament. The Wildcats received the fifth seed in the event and will play the winner of 13 seeded Auburn and 12th seeded Florida on Thursday at approx. 1 p.m. ET. The game will be televised on SEC Network. The tournament is taking place this weekend in a limited capacity Bon Secours Wellness Arena in Greenville, South Carolina.